Many early American artists struggled to make a living and had to take on special commissions to support themselves. Edward Savage was one such artist (he had painted a famous portrait of the Washington family in the 1790s) who took on utilitarian commissions. In 1802, the US government commissioned Savage to prepare one thousand copies of a Mediterranean passport (seen here). He engraved the ship in the top register and a lighthouse scene in the bottom register at the top of this printed form. 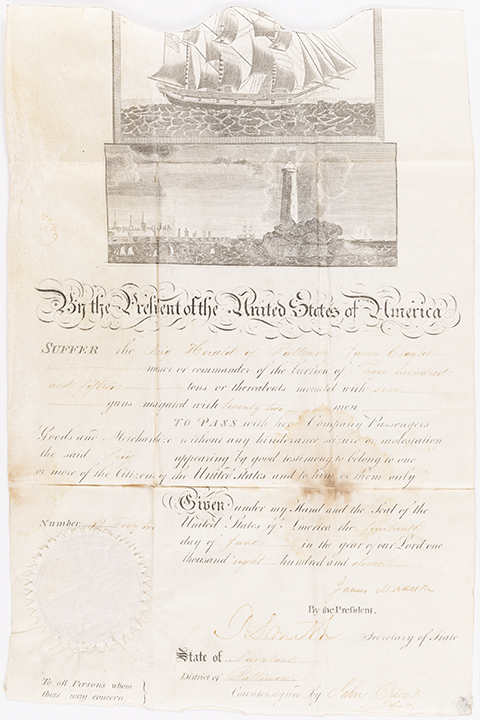 In the late eighteenth and early nineteenth centuries, the strait of Gibraltar was controlled by the Barbary pirates of North Africa. They demanded payment for passage and if not paid, they would hold sailors hostage and confiscate goods and ships. The United States developed a passport system to facilitate travel in the region. Congress authorized payment to the Barbary pirates and created a passport for authorized ships to carry. The top portion was cut off in a wavy pattern and given to the Barbary pirates and the bottom part was carried by American ship captains. When boarded, the two portions of the document could be matched up and therefore served as proof of payment.

In 1811, this document was assigned to the ship Herald, captained by James Chaytor and sailing out of Baltimore. It was signed by President James Madison and Secretary of State Robert Smith. Yet it was not just the Barbary pirates that American ships had to worry about. During the War of 1812, the Herald was captured by a British squadron while it was traveling from Bordeaux, France to Baltimore and the crew was taken to Bermuda until the government could secure their release.