Two German late gothic altarpiece angels have returned to public view in Gallery II at the Chazen. The sculptures were last on display in 2008, and take the place of a work that has been returned to the Haggerty Museum after a one-year loan. 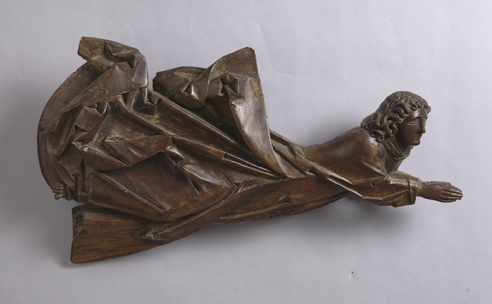 The sculptures, carved in relief, depict flying angels with hands joined in a gesture of prayerful adoration. They wear liturgical vestments befitting acolytes in a Roman Catholic Mass, and they originally would have had wings. Figures like these were commonly part of a large sculpted altarpiece combining freestanding figures and narrative scenes in relief. Specifically, these two angels would have fluttered around central figural compositions such as the Crucifixion, the Ascension of Christ, or the Assumption of the Virgin. 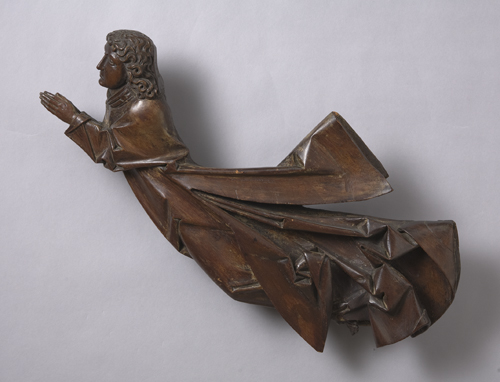 Limewood grows in southern Germany and was used exclusively by German carvers in this area, not only because of its availability but because of its suitability for carving, even against the grain. The wood’s qualities make possible the masterful deeply cut swirling drapery folds in sculpture of this period. Originally, the angel sculptures would have been polychrome, or brightly colored, but many German late gothic sculptures were stripped of their painted surfaces due to a fad that began in the mid-nineteenth century when the unpainted sculpture of Tilman Riemenschneider (German, ca. 1460–1531) was rediscovered. Traces of gesso ground are visible in the deep recesses of the drapery folds of these two sculptures, indicating that the surface had been painted. In fact, the Chazen sculptures were formerly attributed to Riemenschneider, a common occurrence and testament to the widespread late-nineteenth- and early-twentieth-century popularity of this artist. The broad, planar surfaces of the figures’ faces resemble the general stylistic characteristics of Riemenschneider and his workshop, but the carving is less refined in quality. Further research is needed to identify the artist or workshop responsible for these works of German sculpture.

The Chazen Museum of Art is grateful to donor Margaret Rosenberg Spanel of Hightstown, New Jersey, for the gift of the two German late gothic angels. These sculptures are important additions to the museum’s limited collection of late medieval art. Mrs. Spanel (1913–2013) and her husband Abram N. Spanel (1901–1985), a chemist and the inventor of Latex, purchased the sculptures in 1954 from J. B. Neumann (1887–1961), eminent art dealer, critic, publisher, and owner of the New Art Circle Gallery in New York City. Neumann, who arrived from Germany in 1923, championed the work of European modern artists such as Edvard Munch, Alexander Archipenko, Wassily Kandinsky, Max Beckmann, Paul Klee, and Georges Rouault.