Celebrations look a little different in 2020, and Day of the Dead, which begins on October 31 and ends on November 2, is no exception. The multi-day holiday typically involves family and friends gathering to pray for and remember those who have died, but the ongoing Covid-19 pandemic has made this impossible.

SOHE Professor in Human Ecology, Textiles and Fashion Design Carolyn Kallenborn has, for seven years, spearheaded Madison’s Community Altar Project, a unique celebration of Day of the Dead that typically takes place at the UW–Madison School of Human Ecology (SOHE), but this year has gone digital and morphed into the Virtual Altar Project. She began the practice of building physical altars with her students at the Kansas City Art Institute, eventually going to Oaxaca, Mexico, to learn more about it.

In response to her experiences there, the Community Altar Project was born the next year in Madison. For the first two years, altars were displayed in an atrium at Edgewood College, and at SOHE since then. “We would have done it at SOHE again—last year we had a big Day of the Dead party; we had dancers, and the marching band, tamales, hot chocolate—it was pretty great,” she says. “This year you can’t have an inside party, so we’re doing an online altar project. Though I’m still making boxes and giving them away.”

In conjunction with the Community Altar Project, the Chazen is hosting a window installation called Crossings: Remembrance and Celebration, on view in both the bridge gallery and the second-floor windows facing East Campus Mall. Kallenborn and three other artists had planned to go to Oaxaca this year for Day of the Dead, each spending time with local artists and completing a project based on their experiences when they returned home. “And then Covid hit and we had to cancel it,” she says. But instead of canceling outright, they decide to redirect their energies and funds towards Crossings.

“It’s sort of a twist on the Community Altar Project,” says Kallenborn. “except with artwork that’s being seen.

We have this group of artists who are working on issues about death, dying, and indigenous people. So, that’s how Crossings is intersecting with the Community Altar Project. Each of the displays in the window is almost like our own little altar.” 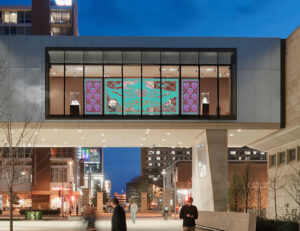 The display will go up on October 28th, and will look similar to this rendering.

“We came up with the idea to put images in the windows, which is cool because they can stay up longer, and you can see them day and night,” she says. “And the format that we made them in—the way that they’re sort of boxes—is fairly similar to our altar box project. It should give that space outside a feeling of what it’s like. It will hopefully redefine the space rather than just having a few things on the window.”

Other than Kallenborn, participating artists include John Hitchcock, professor of printmaking, art department, school of education; Roberto Mata, a graduate student in printmaking; Juan DeHoyos, a graduate student in printmaking; Ana Paula Fuentes Quintana, a photographer based in Oaxaca; and Erasto “Tito” Mendoza Ruiz, a master weaver also based in Oaxaca. Projects will be reprinted on vinyl and hung in the windows of the Chazen for passersby to enjoy.
“For me, the goal of all of this is to get people to stop and think, and remember that we’re just here temporarily,” she says. “Remember those that have gone before us, and remember that we too will be gone, and there will be people after us. The display at the Chazen is part of a larger way to remember that we’re not isolated. We’re connected to everything that came before and everything that will come after. We’re just here for our moment.”

Kallenborn invites the public to take part in the Virtual Altar Project. You can send in images or videos of an altar you make in memory of someone who has passed and build it on any surface you like. If you are in Madison, there are free wooden shadow boxes available for use. Altars will be shared online and projected outdoors both in Oaxaca, Mexico and at the Garver Feed Mill in Madison, at a socially distant celebration on November 6–8 from 6–9 p.m.

Find more information here or go straight to the registration form to pick up a box.