Sculpture at the Chazen, Part I

What is the story of modern sculpture? Art doesn’t always respond the way we expect it to. It is not always thematic. There are outliers. First, it’s a kind of realization of sculpture as a medium that isn’t dependent on another medium. Sculpture has a long tradition. There are religious sculptures from the earliest times. Its peak tradition was in the Baroque period; after that there is a dormant period where sculpture occupied a primarily architectural niche as part of a building.

The first signifier of modern sculpture is liberation from the niche. Sculpture is placed freestanding in the center of the room. It’s put on a pedestal and starts to occupy place—it’s not dependent on architecture anymore.

And how do we distinguish modern sculpture from painting? Painting is almost always flat and nearly two-dimensional. A painting flashes before us like a vision. It is a flat image that doesn’t look like a dimensional figure in the world and it can be separated from the concrete world.

That is not sculpture’s project, however. Sculpture will always have figurative residue or an echo in its work, because once something is dimensional it tends to look like something in the real world. A pile of clay would look like something you have to clean up in your yard, for example. It always will retain a vestige of the figural.

Sculpture also starts to essentialize its form. It seeks to find the most resonant line of a body or find the most gorgeous curve of a bird in space and emphasize it. It’s constantly essentializing shape, reducing. Here are few examples of modern sculpture from the Chazen collection. 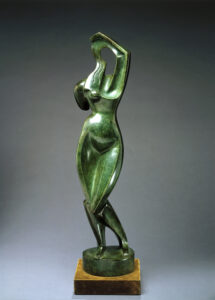 Look at this Archipenko sculpture, Woman Combing Her Hair, which features the bare, most essential lines of what can still be seen as a woman. It’s a kind of seductive curve in place of a mimetic copy of a woman, figurative gesture combined with essentialized form. As a sculpture, it offers a 360-degree view of the subject. Note here how sculpture will change as we walk around it. Sculpture is a conversation between its form and the matter from which it is made. Sometimes the form and material say the same thing and other times they say different things. How can sculpture work within its context? Does it ignore where it is or is it dependent on where it is located for its meaning? For the most part, modern sculpture is oblivious to its actual physical place. 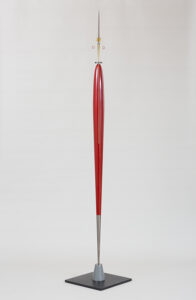 Theodore Roszak was inspired by the Bauhaus belief in the power of art to create a better world. Like many artists in the 1930s, he supported progressive movements concerned with social justice. The Bauhaus constructivist ideal of pure form stripped bare of excess and reflecting a more perfect world was his focus. Red Monument to Lost Dirigible is an example of the aerodynamic form that characterized the streamlined era of 1930–1950. It exemplifies pure form, with non-essential details stripped. This piece is a statement about a vertical red line and the lost dirigible of 1939—the Hindenburg. Notice the fine metal pieces that form the top of the work. Some of them are turned on a lathe to get a perfect cylindrical form—the artist was indeed a skilled machinist. This piece looks like a totem, a monument or an obelisk. It is somewhere between modern and tribal in intent.

It looks functional but it really isn’t. It looks like it could be a thing used for war, but it can’t be. The sculpture invites us to look at the material—does the material match the form? It is made of painted wood, stainless steel, brass, and plastic. Stainless steel is all about extreme functionality and the plastics achieved the clarity of glass without its fragility. They were essential for modern aircraft, functioning as a canopy to protect the pilot from the elements. In sharp contrast, wood and paint have been around for generations. So, Red Monument to Lost Dirigible is an almost industrial piece where the wood softens the stance. It gives the work a more organic feel. 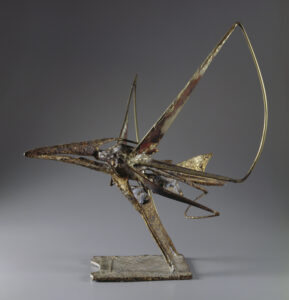 In the early 1940s, Roszak continued to make sculptures and drawings in his machine-shop equipped studio. He learned new metal fabrication techniques, such as brazing, to realize his concepts. He started using photographic studies to explore ideas for his sculptures. In 1945 he learned how to weld with an oxy-acetylene torch. This allowed him to deposit puddles of molten metal onto solid metal pieces, an accretive technique much like clay modeling.

By the end of World War II, the artist was horrified by the wanton killing of millions. He felt quite guilty for having worked as a designer in an airplane factory and remorse for the death and maiming airplanes had wrought in dropping the A-Bomb in Hiroshima. To him, airplanes were as terrifying as pterodactyls. This guilt influenced him to drastically change his approach.

Compare the raggedness of this piece, Flying Fish, to the sleek, aerodynamic shape of Red Monument. Stylistically they are polar opposites. Flying Fish looks as if it’s a twisted remnant of a building that’s been firebombed. The mottled metal is corroded and singed. A smooth, arching rod defines the dorsal fin, suggesting orderliness. The irregular, convoluted shape of the fish head suggests chaos.

This period of Roszak’s work was based on natural forms derived from plants and animals. He used sand casting to create sections of Flying Fish, a crude process of metal sculpting compared to lost-wax casting. This created a grainy texture and limited his ability to achieve fine detail. 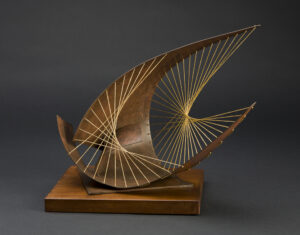 Compare Flying Fish to Barbara Hepworth’s piece, Stringed Figure (Curlew III), a sleek modern form made out of wood and string. There is an almost prehistoric feeling to the material. So, the competition and conversation in Roszak’s form is about the material itself. Is that the case here? This is about the way our experience with sculpture changes over time. 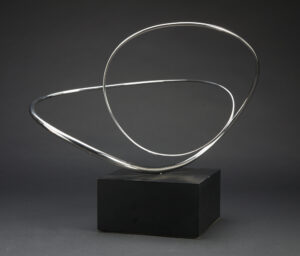 A sculpture can be considered modern in three different ways: first, a centralized and reduced-to-essentials form; second, the use of a modern material, often with technological advances; and third, a non-representational location, sometimes expressed in its form.

In José De Rivera’s piece, Construction #46, we are looking at a stainless-steel sculpture that was originally motorized, literally becoming a moving picture. As it turns, we see different things—like an abstract drawing that changes as you move around it. The stainless steel is rendered into a dynamic line that looks like it’s moving or weightless. It is a modern material made into a very modern form.

The original motor was removed, however, likely because the sculpture would have had to be encased in glass to keep people from touching it. When De Rivera started making this stainless-steel sculpture it was around the time that the product first came on the market. The viewer is invited to look at the positive space, the stainless steel. But also, and importantly, they are invited to look at the negative space between the interlaced steel and the shadows that the object casts on the walls or surface that it may be mounted on. Especially when you consider that it would have been rotating, these shadows would be moving constantly. 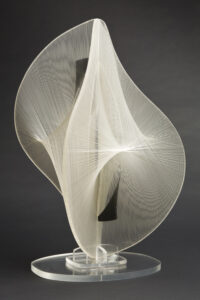 Finally, this piece by Naum Gabo, Linear Construction in Space Number Two, is made out of Perspex (plexiglass and acrylic) and monofilament line—fishing line. These were brand-new products when Gabo started using them. So, in place of marble, we have plexiglass: a new material, which therefore becomes a statement on form.

The intense activity of wrapping the monofilament line around and around the pieces of acrylic also makes a “process” statement. This highly reduced, sleek, almost-functional form also seems to move when you walk around it because of how the light plays off the translucent line. It rises from the ground like a flame.

The sleek design of the work echoes the sleek design of the early- to mid-20th century. It’s a great moment, and exemplifies the feeling that the materials of our time can be used to make art. We no longer have to look to traditional sculpture with its material and form traditions. Artists can make bold and abstract shapes that suggest movement, and make modern material relevant as subjects for art.

This is a new world of opportunity for sculpture that didn’t exist before—to make matter out of the matter that is happening now. Using commonplace industrial materials and transforming them aesthetically is known as ‘constructivism.’ So, plexiglass and monofilament fishing line is transformed into resonant kinds of forms—modern sculpture.