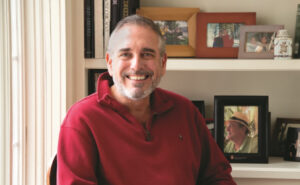 When Jon Sorenson ’85 and David Bedri met in San Francisco in 1997, it was love at first sight. For the 20 years that followed, they were partners in all things until Bedri’s passing in January 2018 from a rare form of pancreatic cancer. Having a full year together before Bedri died granted them the chance to plan and prepare bequests to uphold arts initiatives at UW–Madison — a legacy to sustain some of the things that held the most meaning for them.

“In terms of our backgrounds and value systems, David and I both came from families that embraced the arts, and that is embodied in our estate gifts. I love everything that we do at the university — everything it’s about — but so often, the arts don’t get the necessary support,” Sorenson shared.

The youngest of five children, Sorenson grew up in Milwaukee. With a mother and a grandmother who were amateur painters, he has led a life adorned with art and music since the beginning. Early exposure to museum education ultimately led him to earn a BA in art history at UW–Madison. After completing his graduate work at Williams College, Sorenson packed up his 1977 Buick Century with everything he owned and set out for California. It was that adventurous spirit that led him to a successful career in the high-end art world and to broadening his horizons as a fourth grade teacher at a high-needs school in Long Beach.

Similarly, Bedri’s life was steeped in the arts. He was a piano prodigy and many of his family members in Jerusalem have been giving to the arts for generations. His father, a physician, was first violinist for the Los Angeles Philharmonic in the 1920s. After pursuing a liberal arts degree at the University of California–Berkley and completing his MBA at the Wharton School, Bedri built a flourishing Wall Street career in New York before retiring to California to care for his mother who was battling Alzheimer’s disease.

THE ART OF LEAVING A LEGACY

After a life-changing relocation and five years residing in New Zealand, Sorenson and Bedri made their way back to the States where Jon launched what would become a very successful 12-year career in development with the UW Foundation. During that time, Bedri took advantage of being in Madison and enjoyed auditing a variety of classes at the UW, including art history, and went on to become a proud honorary Badger.

“The world of philanthropy came very naturally to me and gave me a sense of purpose,” Sorenson says. “I knew I had found the perfect job when I began working at the UW Foundation. The work I did there — I really feel like it made a difference.”

With a shared love of and respect for the UW, Sorenson and Bedri invested in what meant the most to them: giving back for a better society.

“Our philanthropy is reflected in the Museum Education Fund at Chazen Museum, the Music Professorship for Mead Witter School of Music, and the Tandem Press Fund created in David’s memory. He loved being a part of the wine auction committee, and I love the work that they do,” Sorenson says.

The couple created endowed funds with clear language and intent that the gifts remain as flexible as possible. They understood that needs and priorities change over time and that discretionary freedom would better serve future leaders.

“We wanted our legacy to be that we made a difference in our lifetimes — on the people we interacted with and the work that we did. We have the ability to change lives,” Sorenson shared. They also made a gift to the Hamel Music Center before David passed.

“I gave a gift to name two seats at the Hamel Music Center,” says Jon. “I wanted to have our names attached to something inside the Center. And as long as the building is there, we’ll be next to each other for perpetuity.”

—article by Nicole Heiman, republished with permission from Wisconsin Foundation and Alumni Association