Visit the new accessions exhibit—currently occupying the back Rowland Gallery—here online before you visit in person. Today we’re featuring the thought-provoking American Guardian by Roger Shimomura. 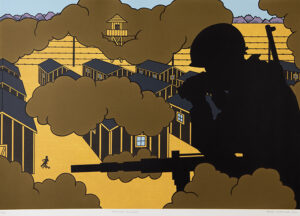 Although he was born in Seattle as a third-generation American, Roger Shimomura spent two years of his childhood in an internment camp for Japanese Americans in Idaho during World War II. The artist has stated that all his earliest memories are from inside the prison. The ironically titled American Guardian depicts an armed soldier surveilling a small child on a tricycle—the artist himself—dwarfed by barracks surrounded by barbed-wired. These symbols reappear regularly in his biting political work.

The artist has said, “Lots of Asian artists are doing beautiful stuff about their culture, but I’m not into that. I’m what someone once called that stick in the eye: Don’t forget, don’t forget.” The hard-edged graphic style Shimomura uses in this and other artworks is as indebted to Pop Art as it is Japanese ukiyo-e prints and folding screens.