We’re highlighting the new accessions on display in the back Rowland Gallery—and hope to see you in person in the museum. Here we’re featuring two works by UW–Madison alumnus John Hughes.

Hughes earned an MFA in 1992. In addition to his work as a sculptor, he is also a composer and musician who constructs the instruments he plays. In his sculptures, which he also refers to as “instruments,” he explores the loss of the connection between humans and tools, along with the diminishing respect for craft. His sculptures often reference traditional materials or methods. This untitled sculpture (below) is reminiscent of a utilitarian form, such as a vessel, basket, or feed bag. It incorporates birch, a nod to nature that is important to Hughes’s practice and may reference traditional Native American vessel construction. 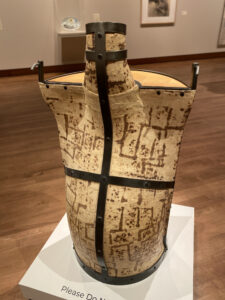 In the case of Untitled from 1991 (below), the rockers on which the work is mounted are reminiscent of historic American furniture, such as cradles and rocking chairs, while the use of steel bands suggest coopered barrels. Many of Hughes’s sculptures incorporate an element of movement, as with this work, which can rock back and forth. 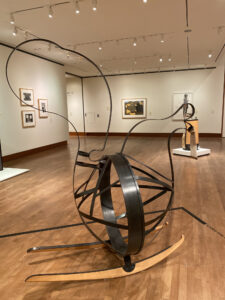