We’ve reached the final artwork in our continuing highlights of the new accessions currently on view in the back Rowland Gallery, Travelers at Shichirigahama Beach Pass Enoshima Island as Mount Fuji Appears Above the Distant Shore, by Kitagawa Fujimaro. 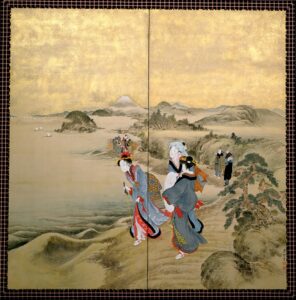 Active primarily as a painter in Edo (present-day Tokyo) during the early decades of the nineteenth century, Kitagawa Fujimaro favored scenes featuring two or three figures in outdoor settings. This painting is special for its format as a two-fold screen, which is rare among Fujimaro’s paintings. The vast landscape depicts a beach near the small island Enoshima, with the coastline of Sagami Bay meandering toward Mount Fuji on the western horizon. Famous for its caves and an ancient shrine, Enoshima was a popular destination for pilgrims, and the sandy beaches nearby were playgrounds for tourists. The strength of this work lies in the sublime atmosphere Fujimaro achieved with subdued washes of pigment, masterfully blended with gold flecking that makes the sand, ocean mists, and sky seem to glow.

If you haven’t seen the exhibit yet, you can make an appointment for a (free) visit.