These paintings show three different styles of landscape during a period of great artistic transition from realism to abstraction in the decades around the turn of the twentieth century. The earliest is a composition by Scottish-born painter John Williamson, who immigrated to the United States as a child. He worked in the style of the Hudson River School, depicting dramatic mountain vistas. In Lake Champlain from Mount Mansfield, Vermont, (below) to emphasize the scale and vastness of nature, he included two Abenaki men. Prior to settlement by European and then American colonists, Mount Mansfield was known by Abenaki residents as Mozodepowadso, or Moosehead.

Marsh Island, Ipswich, MA (below) depicts a salt marsh near the birthplace and principal residence of artist Arthur Wesley Dow. The tidal rivers and wetlands of this area were a frequent subject of his landscapes, both in oil painting and in print. Dow was greatly influenced by Japanese woodblock prints. His placement of the horizon line at the upper portion of the canvas reflects their impact. 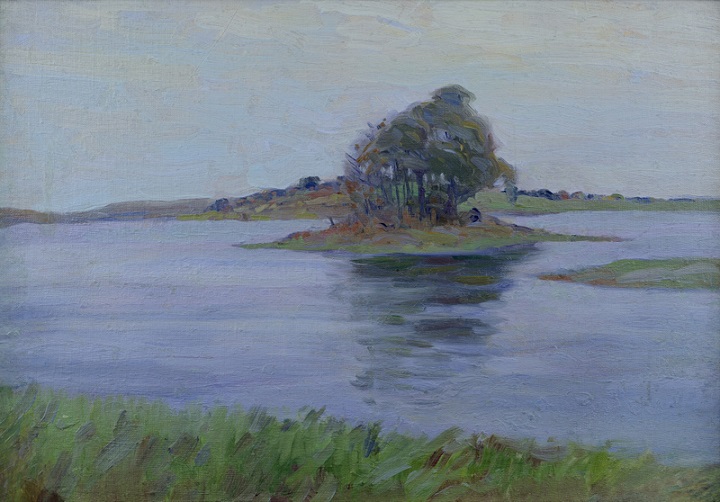 Ida Ten Eyck O’Keeffe was the younger sister of renowned American artist Georgia O’Keeffe. Raised in Sun Prairie, Wisconsin, the O’Keeffe sisters’ artistic talents were nurtured early. Ultimately, Ida’s career was eclipsed by her sister’s success and ambition. Western Landscape (below) shows Georgia’s influence, or, perhaps their shared interest, in the depiction of the American Southwest.