Chazen Museum of Art collaborated with Sanford Biggers and MASK Consortium to dissect and better understand racism in America.

MADISON, Wis. – A partially-clothed freedman kneels before an impeccably dressed Abraham Lincoln, who “heroically” breaks the chains of slavery with one outstretched hand while clasping the Emancipation Proclamation in the other. The scene is depicted in Thomas Ball’s 1873 Emancipation Group, a marble sculpture that serves as a study of Emancipation Memorial, Ball’s bronze monument erected in Washington, D.C.’s Lincoln Park. Ball’s sculpture at the Chazen Museum of Art could easily stand on a tabletop and occupies little physical space in the gallery. However, the political, cultural and emotional significance of the work stretches far beyond its physical size. 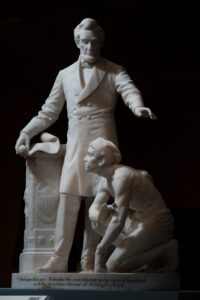 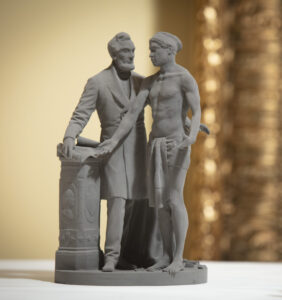 re:mancipation, a multi-year project led by the Chazen Museum of Art at the University of Wisconsin–Madison, visual artist Sanford Biggers and the MASK Consortium, dissects the history of the sculpture; confronts its place in the Museum’s collection; and includes a new artwork by Biggers, a documentary, in-person and virtual exhibitions, an extensive national symposium series, supporting research, archival material and educational resources. A major public milestone of the project is an exhibition premiering at the Chazen Feb. 6-June 25, 2023. The project’s title is lowercased intentionally to address the hierarchies that capitalization can reinforce in our culture.

“It’s an incredible opportunity that we have here at the University of Wisconsin–Madison to really look at how we will move forward when dealing with contentious, challenging, problematic works from our American past and even our American present,” said Biggers. “I don’t think it’s a good idea to shut any of those conversations down. It’s better actually to allow them to be fertile and productive, constructive conversations as opposed to shouting matches—literally and metaphorically. I think artwork is a way to do that and have maybe a more eloquent conversation regarding some of those pasts.”

The Chazen is committed to considering new ways of display and interpretation. Using objects in the permanent collection to work through complex ideas and collaborating with artists in all media has been one of the institution’s primary approaches to advancing that goal. The re:mancipation project is the most significant realization of this type of work to date.

“We believe in the power of art to inform, enlighten and explore our shared history,” said Amy Gilman, director of the Chazen. “The sculpture is a difficult and problematic depiction of racial hierarchy in America, and we are taking it on. Contemporary artists, campus colleagues and community stakeholders are working together to respond to it and better understand its meaning to our culture and country. I hope it is only the start of this conversation.”

Divided into four thematic sections, the re:mancipation exhibition at the Chazen highlights the collaborative process of the project and encourages visitors to participate in the conversation. The first two sections provide a timeline of events and objects from 2500 BCE to the time when Emancipation Group was created. The rich historical context invites the viewer to deepen their understanding of cultural references and iconography, exploring both the intended and unintended meanings of the sculpture.

The next sections feature artistic responses in direct dialogue with the traditional gallery space Emancipation Group has occupied for many years. Offering counterpoints to the conventional installation, this includes newly created works; objects from the Chazen’s collections; sculptures by Biggers, including The Ascendant (2020); paintings on loan, such as Kehinde Wiley’s portrait of Carrie Mae Weems from the series Tricksters; and images documenting the last two years of artistic responses in the Museum. 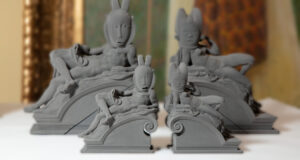 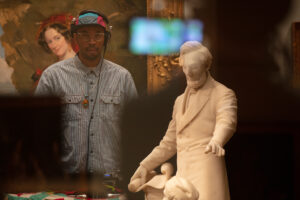 In the final gallery space, video footage of artists, students, faculty and community members responding to Emancipation Group dominates the back wall of the space, bringing to life this rich dialogue. Music created in response and as part of this project comprises the soundtrack to this footage. Included in the video are jazz musician Keyon Harrold; pre-eminent hip hop lyricist Pharoahe Monch; artist Wildcat Ebony Brown; dance faculty member Chris Walker; students from UW–Madison’s First Wave Program; Ph.D. candidate Quanda Johnson; and Robert “Bert” Davis, Ph.D. and Chantel McKenzie from America’s Black Holocaust Museum in Milwaukee, among many others. Additionally, an audio production of the play Necessary Sacrifices is installed near the new Biggers work. The production, written by Richard Hellesen, brings a “conversation” between Frederick Douglass and Abraham Lincoln to life and invites viewers to immerse themselves in the words and voices of two of the most prominent figures of the age. Necessary Sacrifices stars Baron Kelly, a theatre professor at UW–Madison, and Norman Gilliland, a producer on Wisconsin Public Radio. The production is directed by Russell Vandenbroucke. Listen to the performance here.

The centerpiece of the final gallery will be Biggers’ highly anticipated new work created specifically for this project. Lifting the Veil will go on view in late spring and features a standing Frederick Douglass “lifting the veil” of ignorance from a seated Lincoln. Taking inspiration from historical monuments by Charles Keck and more recent Frederick Douglass memorials, Biggers’ work also incorporates a veil made from patchwork quilts. Before the work’s arrival in the gallery, visitors will get snapshots into Biggers’ artistic practice and have the chance to follow his process through interactive models and progress updates. The work will be revealed in the gallery during a special event in May.

“re:mancipation started as a conversation with Biggers about a possible ‘counter monument.’ The project scope has grown tremendously. It is fitting that the final visual response returns to that originating concept,” Gilman said.

At the conclusion of the exhibition, visitors are invited to write, draw, question and comment as part of a collective response that will be incorporated into the gallery wall. Additional opportunities to explore research, original sources and 3D printed elements offer an expanded interpretation of the process as the project continues to develop.

Gilman said the Chazen recognizes the often complex and difficult past associated with works such as Emancipation Group. The Ball work presents Black freedom as an act of white power given to a figure who remains on the ground and is unable to free himself. That characterization was part of the impetus behind the project to “better illuminate and understand” historical works in the collection.

“These conversations are about both understanding and changing the world we live in,” Gilman said. “We imagine people leaving an engagement with this project empowered to examine and think about the symbolism and context of any work of art. We hope this will spark a conversation about systemic and structural racism, history and representation that reaches well beyond the confines of this museum and this exhibition moment.”

This project has been supported through a grant from the Mellon Foundation with additional support from the National Education Association, the Brittingham Wisconsin Trust, UW–Madison’s Office of the Chancellor and members of the Milwaukee arts community, including the African American Network, African American Leadership Alliance Milwaukee, America’s Black Holocaust Museum and others.

About the Artists
Sanford Biggers’ work is an interplay of narrative, perspective and history that speaks to current social, political and economic happenings while also examining the contexts that bore them. Biggers (b. 1970) was raised in Los Angeles and currently lives and works in New York City. He was awarded the 2017 Rome Prize in Visual Arts. He has had solo exhibitions at the Contemporary Art Museum St. Louis (2018), the Museum of Contemporary Art Detroit (2016), the Massachusetts Museum of Contemporary Art (2012) and the Brooklyn Museum (2011), among others.

MASK Consortium is a coalition of museums and educational institutions sharing knowledge. Its mission is to develop and promote a more complete understanding of human history and culture through the digital preservation of art and other cultural artifacts via 3D, 360-degree, VR capture. MASK develops curricula and programming for events, conferences and symposia around said works of art. Moreover, they work to create strategic partnerships with museums, universities, state and local government, as well as corporations and individuals who share their goal of fostering connection and expanding knowledge through the preservation and exhibition of art.