Elisabetta Sirani’s allegorical portrait Signora Ortensia Leoni Cordini as St. Dorothy (1661) has undergone some significant physical changes since its creation in the mid-seventeenth century. The painting was examined in April 2000 by Joan Gorman, Senior Paintings Conservator at the Midwest Art Conservation Center, as part of a survey funded by the Institute of Museum and Library Services. The painting was conserved from October to November 2004 by Barbara Lavorini and Maricetta Parlatore Melega at the Laboratorio degli Angeli in Bologna, Italy, in preparation for inclusion in the first monographic exhibition on this artist, Elisabetta Sirani “pittrice eroina” 1638–1665, which was on view at the Museo Civico Archeologico in Bologna from December 4, 2004 until April 10, 2005.1 Technical analysis, including X-radiography and infrared reflectography, was expertly carried out in Bologna by Teobaldo Pasquali of PanArt, Bagno a Ripoli (Florence). The following description of the painting’s condition prior to conservation and a summary of the technical analysis and treatment are based on documents provided by conservators Gorman and Lavorini preserved in the curatorial file.

Condition of the Painting Before Conservation

The painting is executed in oil on a finely woven, lightweight, plain-weave canvas support primed with a moderate layer of red-brown ground material. It is lined to a finely woven basket-weave fabric with what appears to be an aqueous glue/paste adhesive. Lavorini thought the painting was wax lined instead, but further technical analysis would be necessary to determine the exact lining adhesive used. The paint layer has suffered from excessive cleaning and it retains a thick layer of aged pigmented natural resin varnish that was applied sometime in the past in an effort to achieve a unified visual effect. Areas of abrasion are especially noticeable on the neck of the sitter, in the hair at the back of the sitter’s head where a blue ribbon is tied, on the brown cloth of the sitter’s left shoulder, and on the dark background. In addition, only traces of the necklace worn by Signora Cordini remains; in its original condition it would have resembled more closely the richly built-up paint texture of the jewel on the sitter’s head.

Cleaning tests and an examination of the structural and surface condition of the painting using ultraviolet light were executed by Gorman at the time of the 2000 paintings survey (fig. 1). These revealed that the dimensions and composition of the original canvas differed significantly from its present state. A major alteration to the painting had taken place sometime prior to its acquisition by the museum in 1960. The lower left corner of the canvas containing the sitter’s proper right hand holding a basket of roses and apples—a key iconographic element for the identification of the portrait and its allegorical source—was cut out of its original location in what is presumed to have been a larger original canvas and inserted in its present position. The sitter’s proper left hand, shown supporting the basket, as well as the blue-gray sleeve, were added at that later time to integrate the composition. Strips of canvas were added along the bottom and right edges of the painting to accommodate this pictorial addition as well as to balance the overall composition.

With regard to the horizontal strip of canvas that was added at the bottom of the painting containing the majority of the sitter’s proper left hand, the curiously foreshortened blue-gray sleeve, and an extension of the reddish-brown drapery, it was decided to retain this section as physical evidence of the painting’s troubled history. Moreover, in order to clearly distinguish between the original canvas and this addition, with the aim to present to the viewer what remains of Sirani’s original painting, a wooden liner was added to the frame to conceal the added horizontal strip at the bottom edge.

Two methods of technical analysis were used to determine the past physical history of this painting: X-radiography and infrared reflectography. These techniques reveal information about how the artist painted and how the work of art has changed over time. The analytical photographs taken before the treatment reveal that Sirani’s canvas was altered significantly (figs. 2–5). The X-ray of the Sirani painting shows the nature of the support and its preparation, revealing three different types of canvas that are otherwise difficult to detect with the naked eye. The X-ray of this painting reveals that the area of canvas containing the basket and right hand of the sitter corresponds in weave texture and preparation to the rest of the original canvas, suggesting that it was removed from its original location below and to the left of the new location of the patch (fig. 4). This hypothesis was strengthened by Lavorini’s observation that the weave deformations of the patch are more pronounced than those of the adjacent areas of canvas, as would be expected in a location closer to the edge of the picture and corresponding to the original nail positions (figs. 3 and 4). The X-ray also shows that strips of different types of canvas were added to the right side and along the bottom edge of the picture, including a white, commercially prepared canvas in the lower half of the right edge. Also visible in the X-ray are losses in the original paint layer, as can be seen on the bridge of the nose, around the neck area, and on the sitter’s right hand. The X-radiograph also reveals important information about the artist’s technique, in particular the lighter brushstrokes used to paint the face, and provides useful data on previous restorations, such as the addition of a horizontal strip of canvas along the bottom edge of the painting which includes the major portion of the sitter’s left hand.

Infrared reflectography (IRR) is a nondestructive technique used for analyzing the condition of the uppermost layers of a painting. Infrared reflectograms of the Sirani portrait (fig. 5, and a pseudocolor IRR, not shown) reveal discrepancies in pigments used for the original painting and overpaints, as well as changes in composition made by the artist (pentimenti). Areas of the Sirani portrait that appear blue or green in the painting and red in the pseudocolor IRR, such as the bodice with bow and some, but not all, of the leaves cascading over the edge of the basket, are painted with the original blue pigment used by the artist. The leaves that appear dark green in the pseudocolor IRR reveal the use of a different pigment, also an indication of a later addition. Two pentimenti are visible in the IRR mosaic: alterations in the length of the fourth and little fingers of the sitter’s right hand and the outline of the neckline of the light-blue bodice.

The technical examination and conservation of the Chazen’s Signora Ortensia Leoni Cordini as St. Dorothy has brought to light this painting’s altered state, thus enabling a newly informed reading of the present composition (fig. 6). As one of only three surviving commissioned and documented portraits by Sirani, this work occupies an important place in the artist’s oeuvre, and, despite its compromised physical condition, can be appreciated as one of her most compelling portraits.

Endnotes
1. My sincere thanks to Prof. Babette Bohn for her initial recommendation that the painting be
sent to Bologna for treatment by Maricetta Parlatore Melega. 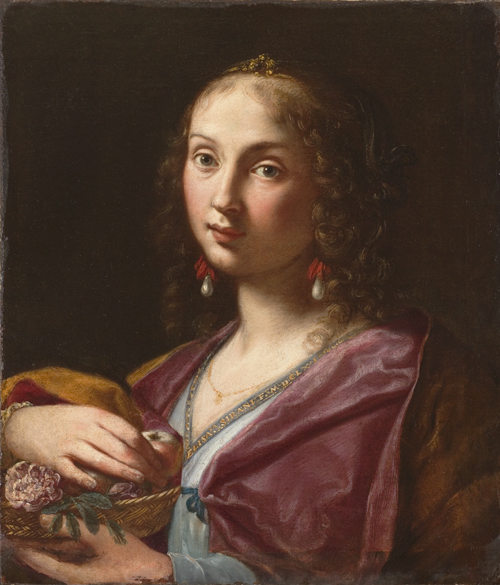