As I write it is Good Friday in the Christian calendar, the day of Christ’s arrest and death on the cross. It is a day of mourning and deep sorrow in the religious tradition of Christianity. In this time of the coronavirus pandemic, as we are following physical distancing orders by staying home and not congregating, my thoughts turn to how art has been used for millennia to accompany religious worship and how the emotional power of art can help channel our own feelings of grief during this difficult time. The Chazen Museum of Art, like many museums around the world, is a treasure trove of such objects. I’d like to share with you some of the works of art that are currently shuttered in the galleries of the museum that relate to this particular moment. Since we cannot visit the museum and see them in person, let’s go on a virtual tour to look at these works together as we call to mind or read along the story of Christ’s suffering, death, and resurrection. 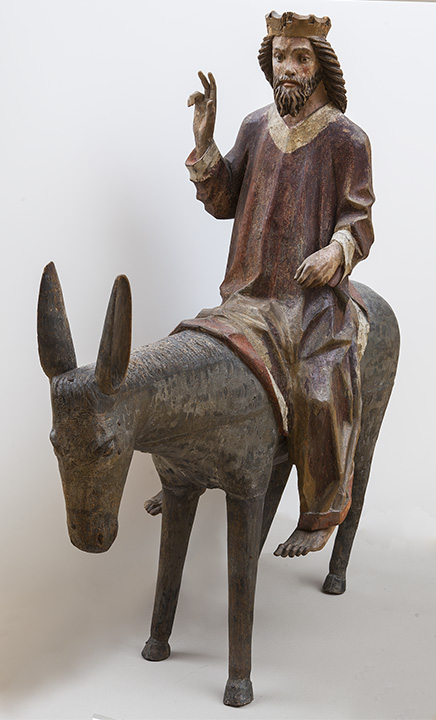 The beginning of Holy Week is Palm Sunday (April 5th in 2020) and the museum’s Palmesel, above, is a rare late-medieval object that would have played an active role in the celebration of this feast day. It is a sculpture of Christ riding the donkey made in Austria in the late fifteenth century that would have been mounted on a cart and pulled through the streets of a town during the procession that re-enacted the Palm Sunday story of Christ’ entry into Jerusalem. There are only four such sculptures in American museums: one at the Chazen Museum, one at the Detroit Institute of Art, one at The Metropolitan Museum of Art, and one at the Walters Art Museum. “Palmesel” is the German word that refers to a nearly life-size sculptural group of Christ dressed in a red robe and wearing a gold crown with his right hand raised in a blessing gestures astride a donkey (Esel). This tradition of church congregations following the village priest in procession behind a Palmesel sculpture continues today in some parts of the world. 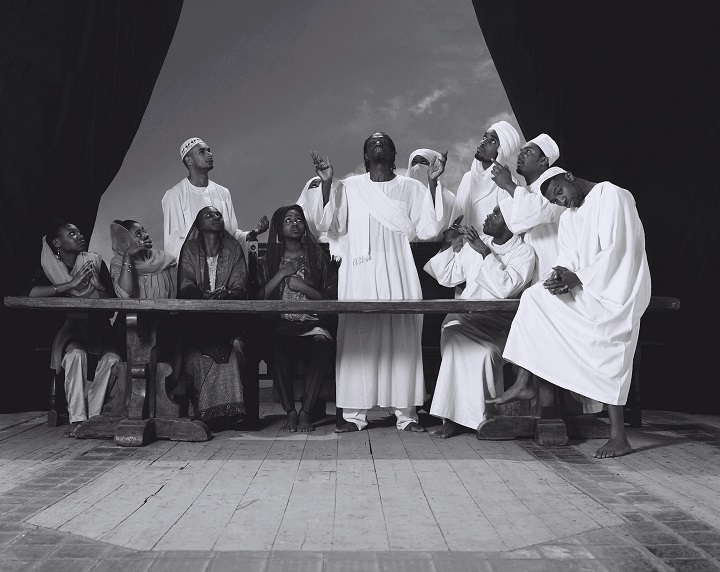 Holy Thursday is the day that Christ celebrated the Last Supper with his apostles. Above is a interpretation of Leonardo da Vinci’s iconic version of the Last Supper by UW-Madison Art Department faculty member Faisal Abdu’Allah. The artist populates this familiar composition with members of the Afro-British and Muslim community in his native city of London. This image can help us reflect on the interconnectedness of all faith traditions during this time of forced isolation and the creative ways global communities are forging new traditions in the celebration of seasonal rituals. 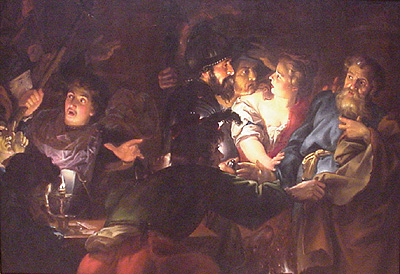 On Good Friday we recall the story of Christ’s betrayal by one of his disciples, Judas Iscariot, that leads to Christ’s arrest and trial before the High Priest of the synagogue. The museum’s seventeenth-century Flemish painting of The Denial of Christ by St. Peter (above) illustrates the moment in which the crowd of onlookers, including soldiers and prostitutes, are gathered around a fire warming themselves as they await the trial and they recognize the apostle Simon Peter (the bearded man seen on the right). When asked if he is one of Christ’s followers, Peter denies their assertions three times before a rooster crows, which had been prophesied by Christ at the Last Supper. 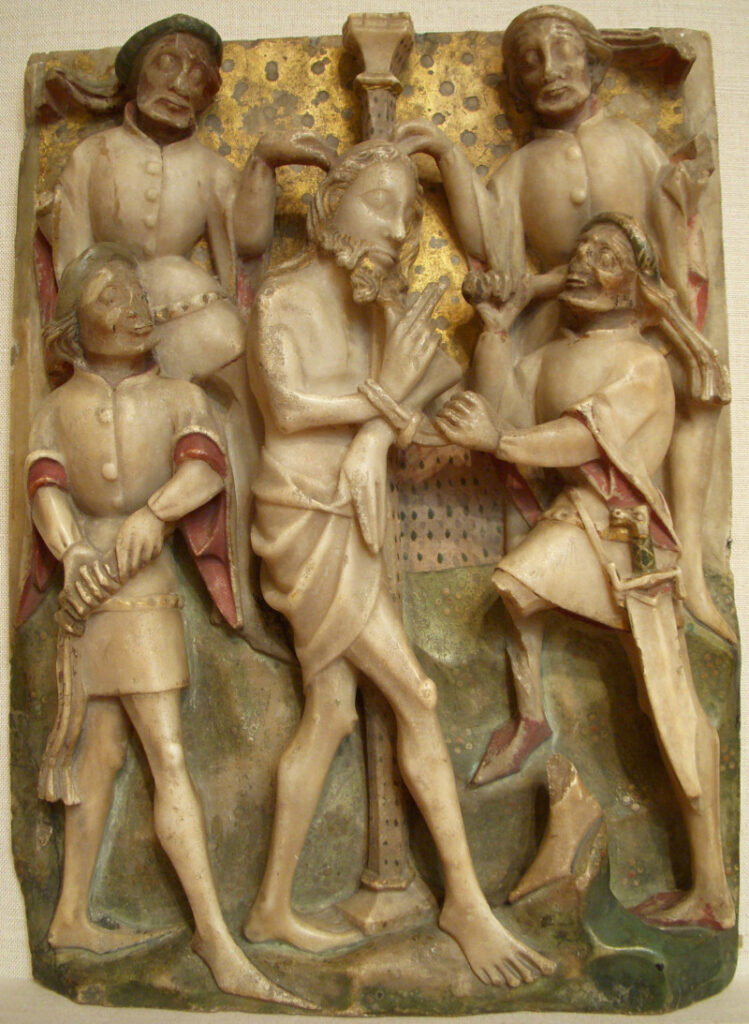 As the Good Friday story continues, Christ is brought to Pontius Pilate for questioning in the Roman praetorium where he is mocked and scourged for claiming to be the king of the Jews. This English fifteenth-century alabaster relief on loan to the Chazen Museum from The Metropolitan Museum of Art (above) depicts the Flagellation of Christ. The central figure of Christ is shown with his hands tied with rope to the column behind him, as he is being mocked, whipped, and crowned with thorns by Roman soldiers. The four soldiers are dressed in contemporary medieval costume and they display grimacing facial expressions that heighten the violence of their actions and the suffering that Christ himself is experiencing. The importance of the viewer’s emotional response to religious images intensifies in the fifteenth century, especially in Northern Europe. At this time there is a proliferation of texts that guide the worshipper in his or her devotions–“how to” manuals for the laity with instructions for prayer and for structuring daily life based on the models of piety provided by the life of Christ, especially the events of Holy Week. 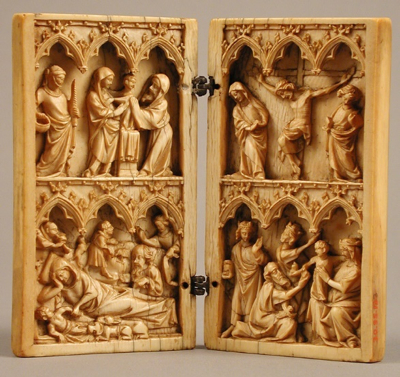 Small ivory diptychs like this fourteenth-century French example (above) on loan from The Metropolitan Museum of Art were intended for use in personal prayer and meditation on the major episodes of Christ’s life. In the upper register of the right panel is the scene of Christ’s Crucifixion. The figures of the mourning Virgin, at left, and St. John, at right, are shown swaying as they grieve the dead body of their son and teacher hanging on the cross. The expression of intense emotions in sculptures such as these served as supports for daily meditation and devotional practice for people in the Middle Ages, who would have turned their attention to this particular scene with more intense emotion on Good Friday. 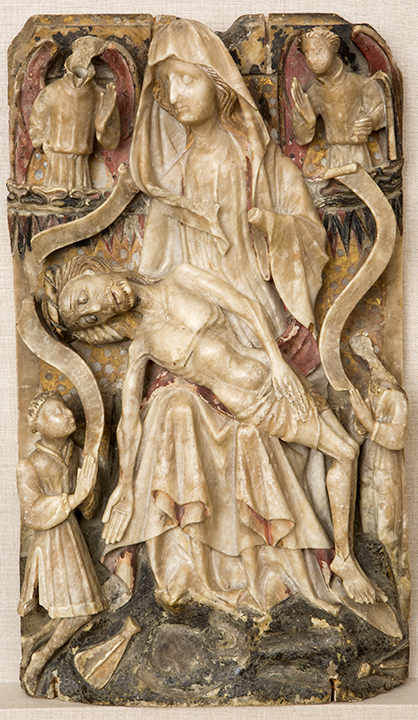 Following the Crucifixion, the body of the dead Christ in taken down from the Cross. The fifteenth-century English alabaster relief above depicts the Virgin Mary lamenting over the body of Christ displayed across her knees, flanked by adoring angels on clouds above and by worshiping donors below. The male donor at left and his wife on the right (head missing) shown in contemporary fifteenth-century costume kneel to recite prayers that are carved in elegant Gothic letters on the speech scrolls rising from their joined hands. The inclusion of secular donors suggests that this alabaster relief probably functioned as an independ­ent object used in private devotion, rather than as part of a larger altarpiece made for a church. 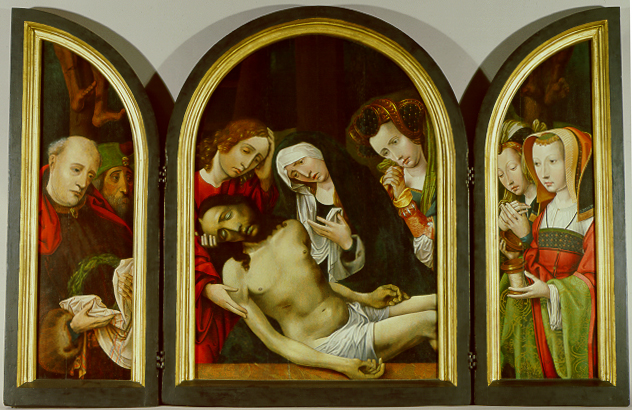 The Good Friday recitation of Christ’s Passion concludes with a recounting of how the dead body is prepared for burial in the tomb. This fifteenth-century Flemish triptych of The Lamentation at the Chazen presents the cast of characters present after Christ’s Crucifixion at the Place of the Skulls, or Golgotha in Hebrew, between two thieves. At left, we see Joseph of Arimathea, who took Christ’s body down from the Cross holding the crown of thorns and a burial cloth and Nicodemus behind him, waiting to assist in the preparation of the body for burial. The central panel is dominated by the pierced body of the dead Christ as it is lowered into the stone tomb, supported by St. John at left, the mourning Virgin who holds Christ’s head in her right hand in the center, and the Virgin’s sister, Mary the wife of Clopas, whose hands are clasped and raised to her face in sorrow. The other two Marys occupy the panel at right, with Mary Magdalene in the foreground holding a jar of oil for the anointing of the body. The grieving expressions of the figures in the central panel and the prominent display of Christ’s body are intended to provide a visual focus for the viewer’s prayers and meditation on the death of Christ, as well as serving as a reminder of their own mortality. 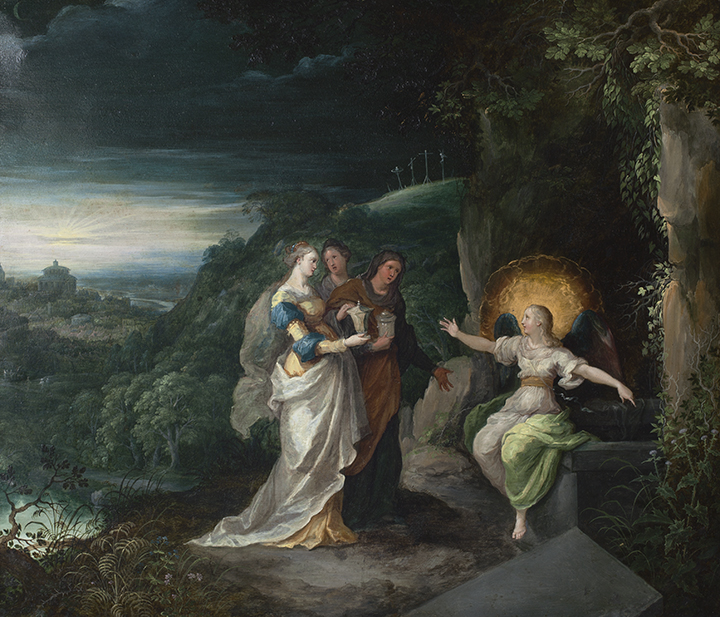 Holy Saturday is a day of mourning and of vigil as Christians await the resurrection of Christ on Easter Sunday. This seventeeth-century painting on copper by Frans Francken II (above) shows the Marys arriving at the tomb where they witness the opening of the tomb accompanied by an earthquake and the arrival of an angel dressed in white who reassures them with these words, according to the Gospel of Matthew (28:5-7): “Do not be afraid! I know that you are seeking Jesus the crucified. He is not here, for he has been raised just as he said. Come and see the place where he lay. Then go quickly and tell his disciples, ‘He has been raised from the dead, and he is going before you to Galilee; there you will see him.’ Behold, I have told you.” 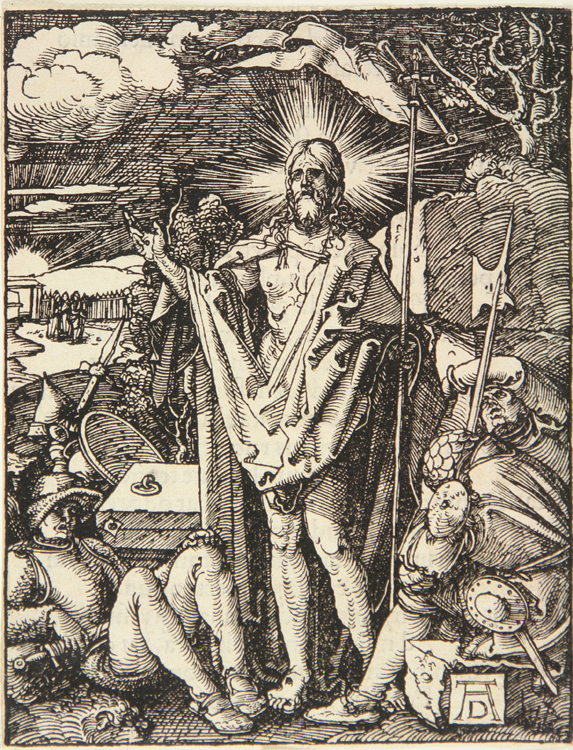 Belief in the promise of salvation through Christ’s rising from the dead is celebrated on Easter Sunday. In Albrecht Dürer’s print of The Resurrection, a radiant and blessing Christ emerges from the tomb holding a cruciform staff and banner, symbols of his victory over death and the salvific power of faith.

I hope that this journey through the Chazen Museum’s collection has provided you with some support in your personal observances of the religious festivities during this time of isolation or has offered you some moments of diversion and appreciation of how art can simultaneously teach us about the past and accompany us in our experiences of the present moment.