The 2018 Russell and Paula Panczenko MFA Prize has been awarded to Michele Marti. Marti will create lithographs and video of the body—backs and butts—investigating how the body rests. Her upholstered furniture with mono-printed surfaces shows the interaction between the body and object as she thinks about the body, vulnerability, control, and how we present the self. When we sit, our bodies smash and squish in and onto the surfaces on which we rest – of this we have no control. But everyone has a body, and every body is unique, just like fingerprints. Michele is interested in the depository of memory and the traces we leave behind, all the while creating an intimate moment between the viewer and the work.

The juror for this year’s Chazen Prize is Emily Zilber, the Ronald L. and Anita C. Wornick Curator of Contemporary Decorative Arts at the Museum of Fine Arts, Boston.

In One Sitting: Michele Marti

Juror’s Statement: Collapsing with abandon into a comfortable chair, especially after a long day, is one of life’s undervalued pleasures. Seating is often ergonomically designed to enhance our comfort and stability. The converse is also true: after a day spent in a chair designed without the human body at the forefront we feel the impact physically, deeply and fully. This interdependence is underscored through language. Bodies and chairs alike have arms, backs, legs, and feet, but also shoes, headpieces, and skirts to clad them; a chair, when stripped of its ornamental crests and upholstery, can be just as naked as a newborn baby.

Michele Marti’s work recognizes the symbolic potential inherent in the synthesis of human and furniture forms, taking full advantage of such overlaps and making them explicit. She rejects a fundamental and assumed distinction between human and furniture. She sees no black and white rule that bodies touch and act while furniture is passive, touched and acted upon. This gray area is explored through a synthesis of performative action, printmaking, and upholstery, which holistically integrates the body into seating forms. It is difficult to tease apart distinctions between the two, and nakedness comes into play in literal fashion. The impressions of a nude body—or bodies—are left on a sofa. They do not depict perfectly composed beings; instead, pressed flesh that flattens and expands upon sitting, genuinely and comfortably. The marks on Marti’s sofa exist as unfamiliar and spectral forms. They dare viewers—and users—to overlook a moment in the past, preserved, when unknown bodies held the space we currently occupy. The bodies of others, in all their imperfections, also come into our physical space through a video piece in which an acrylic chair becomes a platform for a naked man and woman. We see them from underneath, offering an intimacy and familiarity that belies the separation suggested by the television monitor.

Marti also uses the human form to “dress” found furniture. Prints made from naked bodies sitting, Vaseline-clad, on lithography stones are processed, printed, scanned, and ultimately woven in wool using a Jacquard loom. Instead of leaving an impression on the upholstered surface, as in Marti’s sofa, here the memory of a body at rest is inextricably integrated into the upholstery. This cloth is styled with the thick weave and nubbled texture characteristic of mid-century Scandinavian furniture. While the clean lines of a Danish Modern chair may have been anthropometrically modeled on human proportions and bodily requirements, Marti’s weavings don’t present measured or ideally symmetrical bodies. Instead, we see half-formed impressions with muddled edges. Sitting on her upholstered chairs brings the user uncomfortably close to the naked body of a stranger, even if just as a hazy memory made static.

Both the chair and the human form are perpetual physical and formal challenges. They offer to artists endless fodder for exploration and experimentation, even as they refuse to be fully solved as either a design problem or aesthetic concern. Michele Marti’s work makes no pretense towards seeking such resolution, choosing instead to mine the interactions between our bodies and the furniture in which they seek respite.

My name is Michele Marti. I was born is Riyadh, Saudi Arabia, raised in South Florida by my Colombian mother and my Swiss father. In 2011, I received a BFA from California College of the Arts in San Francisco. My MA show titled Ways of Breathing exposed the cognitive dissonance of control; the discomforts of anxiety, panic, aggression, and isolation. Learning how to navigate vulnerability, fears, and desires throughout a forced process of renewal became the essence of daily survival. My work has transitioned from physical relationships, interactions, and desire, to the internal battles of discomfort and depression, while unpacking layers of the private self.

For the Russell and Paula Panczenko MFA Prize I created lithographs of the body—backs and butts—investigating how the body rests. I will also present a film of individuals seated in acrylic chairs shot from below, unconsciously discovering another layer of the self in action. I created an upholstered sofa with the body mono-printed onto its surface to show interaction between the body and object; and I wove my own fabric of a printed image to show identity of an individual without revealing the individual’s identity, and then upholstered chairs with the created fabric.

I think about the body, vulnerability, the uncontrollable, and the things we can and cannot do to present the self in a certain way. When we sit, our bodies smash and squish in and onto the surfaces on which we rest—over this we have no control. But everybody has a body, and every body is unique, just as fingerprints are. I am interested in the depository of memory and the traces we leave behind, all the while creating an intimate moment between the viewer and the work. 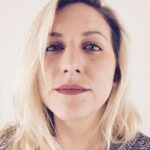