A survey of American drawings from the 18th century to the early 20th century will introduce audiences to a range of artists, from anonymous to well-known practitioners, who excelled in a variety of drawing media and subject matter. Picturing a Nation: American Drawings and Watercolors traces colonial folk art to European-inspired academic styles to a distinctly modern, American form of draftsmanship. With pen and ink, graphite, watercolor, chalk and pastels, these artists composed incisive portraits, sweeping landscapes, historical narratives and scenes of everyday life.

Picturing a Nation: American Drawings and Watercolors is co-curated by the Chazen’s Janine Yorimoto Boldt, associate curator of American art, and James R. Wehn, Van Vleck Curator of Works on Paper. The majority of the drawings in the exhibition are drawn from a series of exceptional gifts to the Chazen over the years from D. Frederick Baker and the Baker/Pisano Collection and from Mr. and Mrs. Stuart P. Feld.

Themes such as the colonial foundation of American drawing, the formation of the American school of artists who traveled to Europe, the development of the American Academy on the East Coast of the United States, portraiture, landscape and self-taught women artists will be examined through the scope of drawings in the exhibition. Select locations represented in the images include the Niagara River, Lake George, Hudson River Valley, White Mountains, Lake Superior region of Wisconsin, and the Mississippi River.

Among the exhibition’s many highlights are Benjamin West’s neoclassical Rustic Lovers Forewarned of the Approach of a Thunderstorm (1785), Louisa Jauncey Ketchum’s watercolor and ink botanical study Hepatica of Noble Liverwort (circa 1819), the compelling charcoal and chalk portrait of Miss Brinkley by Eastman Johnson (1855) and John Marin’s modern abstraction of the Brooklyn Bridge in graphite (circa 1913). 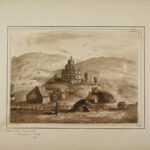 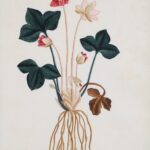 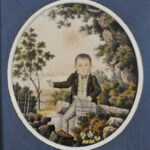 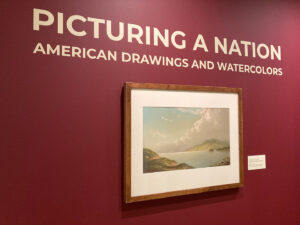 Take a virtual tour of the exhibition.

This exhibition was made possible with support from the Barbara Kaerwer Prints and Drawings Fund and a gift from D. Frederick Baker.