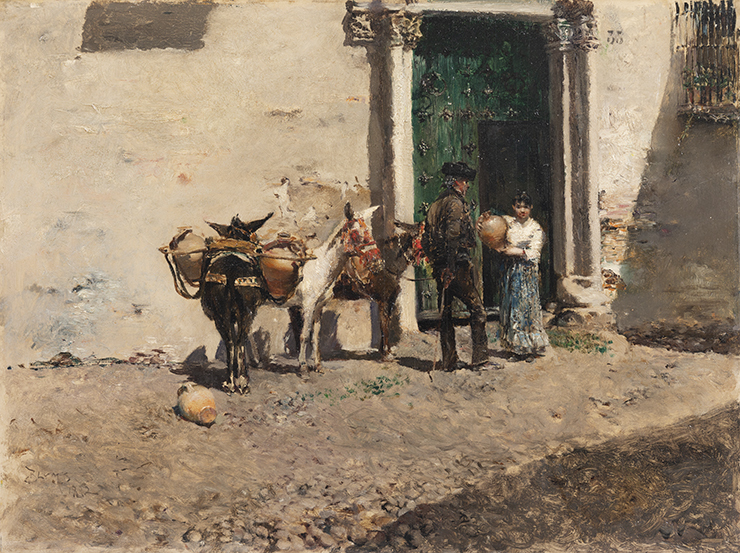 In August, the Chazen acquired a number of exciting new artworks. Today, I want to highlight this painting by Robert Frederick Blum. Toledo Water-Carrier was created in 1882 while Blum was traveling through Spain with fellow artist William Merritt Chase. Blum was interested in depicting scenes of Spain’s traditional, pre-industrial laborers. Toward the end of his planned stay in Toledo, Blum met a water carrier (aguador) who inspired this painting. He wrote to Chase that “I have fallen in with a water carrier and subsequently shall stay here another week.” Water carriers brought drinking water to residents from the Tajo River, due to Toldeo’s high elevation. Blum depicted the water carrier delivering the daily quota of water to a young woman, who gazes directly at the viewer. Three donkeys follow the water carrier. Donkeys and water carriers were popular elements in stereotypical American imaginings of Spain, and they appear in several of Blum’s sketches from his travels, as well as in contemporaneous fictional accounts of the country. Immediately upon Blum’s return from Spain, he submitted this painting to the National Academy of Design annual exhibition in New York City. The painting was admired by critics and purchased by the renowned collector Thomas B. Clarke.